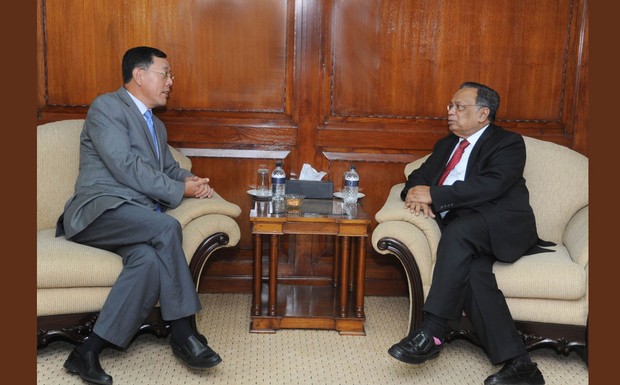 China is keen to send a business delegation here as it wants Bangladesh’s exports to grow, the foreign ministry has said…

The outgoing Chinese Ambassador Li Jun conveyed this intention in a farewell meeting with Foreign Minister AH Mahmood Ali on Tuesday at the office.

The foreign ministry quoting the ambassador said he was “very keen” to help Bangladesh’s exports to China grow.

The two-way trade is heavily tilted towards China.

According to the Dhaka Chamber of Commerce of Industry, of the $ 7billion two-way trade, Bangladesh’s exports were less than $500 million in 2012-2013 fiscal.

China is looking at investing an additional $500 billion in other countries, importing goods over $10 trillion, and sending 400 million tourists abroad over the next five years as new reform measures are getting underway.

The ambassador had earlier said as a neighbour “Bangladesh should have a good share of it”.

On Tuesday, he said the business delegation would come and discuss the ways of investing more in Bangladesh.

Both countries would celebrate 40 years of bonhomie jointly next year.

The foreign minister thanked the ambassador for his support during the assignment and hoped that the relations would strengthen further during his successor’s tenure.