CHINA STEALS MARCH ON RIVALS TO INVEST IN BANGLADESH

CHINA STEALS MARCH ON RIVALS TO INVEST IN BANGLADESH 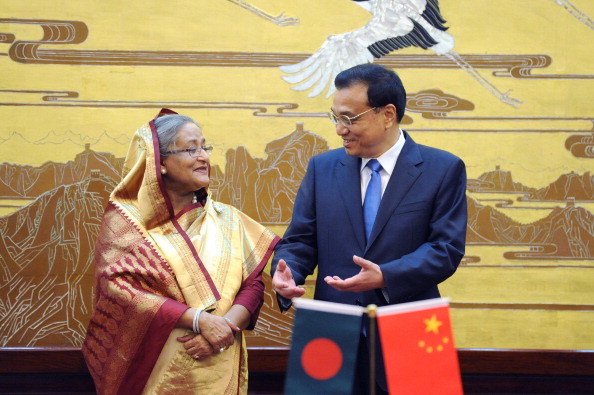 Next year marks the 40th anniversary of China’s recognition of Bangladesh. It’s not a celebrated anniversary for many, least of all the country’s prime minister, Sheikh Hasina. The year, 1975, was also that of the death of her father, the country’s independence hero Sheikh Mujibur Rahman. His struggle against Pakistani domination was bitterly opposed by Beijing, where in 1971 state media described him as a “puppet countenance” and the country’s creation as “fascist nonsense”. It wasn’t until he and most of his family were gunned down that China opened relations with the country.

How times have changed. Mujib’s daughter, one of only two surviving family members from that day in August 1975, has just wrapped up a visit to Beijing. Now, Chinese state media say the two countries can “dream together,” with relations at a “new historical high.”

Their shared history dates back perhaps as far as the 4th century BC and the south-western silk road – which is precisely what the Chinese have in mind. There is bold talk of a new “economic corridor” and, as Xi Jinping, China’s president, noted on meeting Hasina, “Bangladesh is an important country along the Maritime Silk Road.”

Hasina was re-elected to office on January 5 in a constitutionally legal yet mostly uncontested election that followed months of violent and deadly protest.

She was roundly supported by India, where the Congress party – ejected from government in India’s elections last month – is a long-time ally. With Congress suffering humiliation by the victorious BJP of Narendra Modi, there will be “a greater psychological distance” between Dhaka and Delhi, says Imtiaz Ahmed, a political scientist at Dhaka University. The opposition Bangladesh Nationalist Party (BNP), once allied with Beijing, has dispatched a “diplomatic mission” to western democracies to drum up support.

The Chinese have manoeuvred into this gap. There is plenty at stake. Bangladesh’s economy has been robust, consistently growing at annual rates of 6 per cent or more, despite the political mayhem. Yet its infrastructure is in a deplorable condition for a country dubbed a “next 11″ economy and which is chasing China for the crown of the world’s largest exporter of ready-made garments.

China, though, is keen to help. From infrastructure to factories, deals have been inked that promise to fix many of Bangladesh’s problems and seek a perfect off-shoring location for labour-intensive Chinese manufacturing. The most recent deal will see a “garments village” constructed south of the capital Dhaka in Munshiganj, with Chinese company Orion Holdings. This hopes to address a number of bottlenecks, including the issue of factories located in unsafe buildings in the congested capital.

Nearer the coast, Chinese manufacturers will get their own dedicated export processing zone, mirroring a prior yet troubled Korean processing zone, both in Chittagong, the country’s coastal second city. Bangladesh’s garment exports to China grew by over 68 per cent year on year between fiscal years 2012-13 and 2013-14.

The country’s lack of electricity meanwhile was robustly attacked in Hasina’s first term, although largely with the construction of stop-gap rental power plants, which now account for 27 per cent of electricity production but which are viewed as unsustainable. China will step in to build a 1,320 MW coal plant at Patuakhali. It joins Japan and India in helping this low lying country, described as the most vulnerable country to climate change, in developing coal plants.

Manufactured good will now be able to travel Chinese-built roads and probably leave through a $14bn Chinese-built deep sea port in the country’s south at Sonadia, due to be developed by the China Harbour Engineering Company. This will see China beat competitors Dubai Ports World and the Rotterdam Ports authority to develop the facility. China’s ambitions near Cox’s Bazar have India worrying that this will give Beijing greater naval capacity in the Bay of Bengal. A major source of leverage for India is its current ability to cut off shipping routes through the Bay of Bengal to the Middle East and Africa, through which crucial fossil fuels must pass.

Perhaps of even greater symbolism to the west, China looks set to take part in the construction of the giant and much-needed Padma Bridge project. The Padma river dissects the country and can only be crossed by ferry after a lengthy wait. It leaves the south-west disconnected from the rest of the country and the capital; estimates suggest the bridge would add some 1.2 percentage points to GDP growth. The World Bank was due to fund the 10 kilometre long bridge with its largest ever grant but pulled after SNC Lavalin, a Canadian engineering group, was banned from tendering for 10 years after a World Bank investigation of alleged corruption at the bridge project. China Major Bridge Engineering Co will now step in to take their place.

Hasina gamely noted on her trip that, “in the near future, China will be the world’s biggest economy. As an Asian country, Bangladesh takes pride in that.”

This is not just political posturing. Bangladesh has arguably done much to mimic China’s development model. Largely cut off from global financial systems, as China was before it joined the WTO, Bangladesh has none the less become an exporter of labour intensive, low end manufactured goods. China could be a perfect partner, unencumbered by political squeamishness, with state backed entities to get into untapped opportunities, barred to private enterprise in Bangladesh by the high cost of capital.