UNESCO Director General Irina Bokova has called Prime Minister Sheikh Hasina a ‘woman of courage’ and lauded her role in empowerment of the women and girl children.

Handing over the UNESCO ‘Peace Tree’ memento to her in Dhaka on Monday, Bokova said Hasina ‘is a strong voice’ on the globe in their empowerment.

The prime minister was presented with the Peace Tree at an international conference, marking the International Literacy Day, in recognition of her contribution to education and empowerment of women. 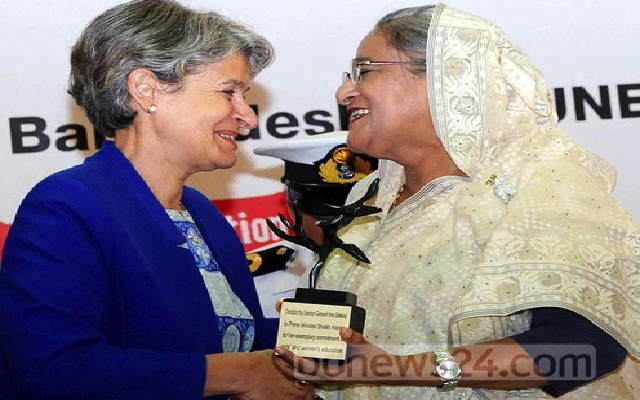 Bokova recognised Hasina as a “close friend of the UNESCO” who is a “strong advocate on world stage in girls and women education”.

The UNESCO chief said she was honoured to have been joined by Hasina in launching the Global Partnership for Girls and Women Education in 2011.

Bokova said it was Hasina’s able leadership that made Bangladesh a champion in the field of ‘global education first initiative’.

She said the award was ‘a symbol of understanding peace and freedom’.

Hasina dedicated it to the women of the world.

The prime minister said her government believed that only proper education could make a woman self-reliant ‘socially, psychologically and economically’. 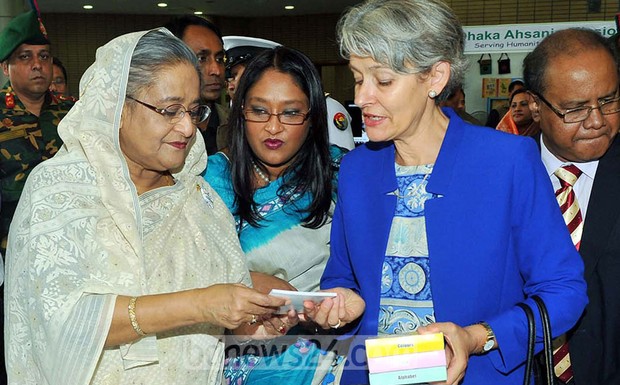 Education could give the women courage to stand against injustice and discriminatory behaviours, she said while highlighting Bangladesh’s progress in the sector.
She said government measures to improve education quality bolstered the students’ confidence.

“The pass rate in public examination is 92 percent,” the prime minister said. “Our aim is to take it to at least 98 percent in future.”

Hasina identified educating every child, especially girls, as “one of the biggest challenges” for the world.

She said Bangladesh pulled itself out of the situation that had hampered girls’ education.

Earlier, the prime minister handed over the ‘UNESCO Literacy Award 2014’ to seven representatives of six countries including the USA, Spain, South Africa and Algeria which are champions in mass literacy.