MOVEMENT AT THE COST OF PEOPLE FOR WHOSE GAIN ?

MOVEMENT AT THE COST OF PEOPLE FOR WHOSE GAIN ? 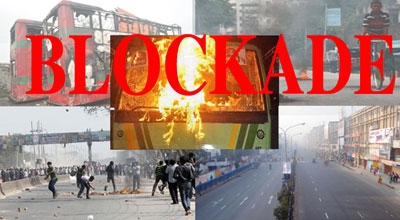 The blockaders and also the government should neither be oblivious nay at all forget the catastrophe that has already befell in all areas of national life as obvious consequence of blockade.

Leader of the 20- party opposition BNP chairperson Begum Khaleda Zia has indicated that to intensify the movement they are contemplating to enforce blockade in the capital city Dhaka and add hartal country-wide along with ‘bandh’ or blockade after the winding up of the Ijtema. On top of that at a heightened stage of the movement the opposition may go for non-cooperation but she did not clarify the nature of non-cooperation and also whether that would be non-violent.

As the opposition is putting sodium chloride on cuts and wounds it can be inferred that the non-cooperation will not be non-violent as the opposition neither believes in Gandhi-ism nor normative logic of Bangabandhu when he called non-violent non-cooperation on 7th of March 1971. Without being partisan one can say that in a movement which has been waged for only a transfer of power from one set of people to another can ask the logical and humanitarian question whether the lives, property, livelihood and normal course of life of the people can be so miserably upset.

All conscious citizens of the country for last six/seven years have noticed that there has not been even an iota of public demand in the movement agenda of the opposition. Ipso facto is an irrefutable proof that the movement is nothing but a destructive effort at the cost of the people.

Media reports say that by Sunday last 27 people died, some others fighting with death and may soon die, and more than 500 hundred people seriously injured. Who are these deceased, injured and colossally harmed people (?) They are no ruling party people, opposition activists or even posh people; they are daily wage earners, common citizens and students. None of their demands or any promise for them or better life of the people of the country have got place in the movement.

The questions of good governance, transparency, fair play and accountability have been the long urge of the people but the movement that is very painstaking has not promised any one of them. Why then the people would participate in the movement and why they shall at all suffer for its success. The life of the common people is beset with multifarious problems but the movement is totally silent about that.

Hence, people are not likely to make supreme sacrifice for that knowing possibly that such acts are done which kills some people every day. The opposition, of course, claims that they do not kill people, then who does it? The government here has a responsibility of pinpointing some of the specific cases so that the secret comes to broad daylight.

1 Response to MOVEMENT AT THE COST OF PEOPLE FOR WHOSE GAIN ?