THE POLITICS OF IMRAN KHAN AND KHALEDA ZIA

THE POLITICS OF IMRAN KHAN AND KHALEDA ZIA

There is a huge difference in the political principles that Imran Khan and Khaleda Zia pursue. For Imran Khan, loyalty to the country and its founding principles has always been admirably maintained. In the case of Khaleda Zia and the party her late husband founded and which she leads today, politics has consistently been a matter of undermining the fundamental principles on which the state of Bangladesh was founded in 1971

There are times when you need to sit back and observe the way Pakistan and Bangladesh have been functioning since they broke away, as a single country, from the rest of India, in 1947. Of course, for the last forty three years Bangladesh has been a free country, absolutely happy to have extricated itself from the Pakistan state and free of the thousand and one maladies which afflicted it in the 8,890 days in which it functioned as East Pakistan.

But that is not the point. It is something else. If you observe what the Pakistan Tehreek-e-Insaf of Imran Khan and the Bangladesh Nationalist Party of Khaleda Zia have been doing of late, you are quite inclined to ask yourself where they mean to take their countries in all this battle for democratic rights, as they call it.

Imran Khan will not rest until Nawaz Sharif relinquishes power; and judging by the obduracy Khaleda Zia has been demonstrating over the past few weeks, she will not be happy until Sheikh Hasina agrees to quit office and make it possible for the BNP to ride back to power. Note that both the Muslim League in Pakistan and the Awami League in Bangladesh happen to be wielding authority through coming to power democratically. But does that matter? The PTI and the BNP remain reluctant to acknowledge the huge damage they are causing to the tenuous democracy which operates in Islamabad and Dhaka.

And what is now happening is that in both the countries, citizens are beginning to question the nature of the pluralism which drives their political systems. To what extent are you willing to go in having democracy operate when you see before you all this unbridled ambition to get to power? In Imran Khan’s case, democracy in Pakistan cannot be secure unless the elected government of Nawaz Sharif is forced out of office. With Khaleda Zia, it is a simple matter of keeping an entire Bangladesh hostage to her demand for fresh elections, to a point where she expects the constitutionally established government of Sheikh Hasina to collapse and the doors to power once more opened for the BNP.

In Pakistan, Imran Khan is finally out of the container in which he spent part of his life before the Peshawar tragedy jolted him back to the bigger realities facing his country. In Bangladesh, Khaleda Zia refuses, as of this writing, to step out of her party office but is certainly not unwilling to keep citizens in a state of suffering in the interest of democracy.

There is, of course, a huge difference in the political principles that Imran Khan and Khaleda Zia pursue. For Imran Khan, as for every Pakistani, loyalty to the country and its founding principles has always been admirably maintained. No Pakistani argues with the ethos of his country, an idea Pakistani politicians since 1947 have upheld vigorously despite their divergent political views. 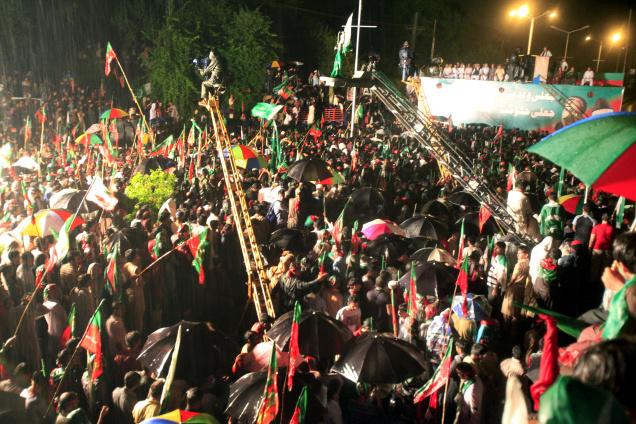 In the case of Khaleda Zia and the party her late husband founded and which she leads today, politics has consistently been a matter of undermining the fundamental principles on which the state of Bangladesh was founded in 1971. The PTI in Pakistan does not distort history. Its faith in the reasons behind the creation of Pakistan has never wavered. It has never argued that the two-nation theory upon which Pakistan was founded needs to be replaced with secular ideals. Conversely, the BNP in Bangladesh has for nearly forty years cheerfully gone around playing truant with the history of the country in which it pursues politics. It has never believed in secularism and indeed has in its subtle ways embraced the very communalism which through the War of Liberation the people of Bangladesh happily discarded. The PTI has respected Quaid-e-Azam Mohammad Ali Jinnah. The BNP has gone around badmouthing Bangabandhu Sheikh Mujibur Rahman.

Those were the differences. And then, of course, there are the similarities which are to be readily noted as both Imran Khan and Khaleda Zia inform their people that the elected governments which today administer Pakistan and Bangladesh must be pushed out of office because they are unhappy with them. Nearly two years ago, when the Nawaz Sharif government took office, the PTI did not really complain. A year ago, when the BNP refused to be part of the election and the Awami League went ahead to obtain a fresh term in office, Khaleda Zia cried foul. Imran Khan wants a recount in all the national assembly seats where he says votes were stolen or stuffed. Khaleda Zia wants a fresh election altogether, one she hopes will be conducted under caretaker arrangements and will lead her back to office.

To be sure, those who wield power in Islamabad and Dhaka today are not perfect beings, are not angels and certainly cannot be above reproach. Both governments have made mistakes. Both have demonstrated degrees of arrogance that have only left the people of Pakistan and Bangladesh wishing it were not so. But that can hardly be reason for two pre-eminent politicians to ask that properly constituted governments must go only because they want them to go. Why don’t they do something better? Why don’t they enlighten people, between now and the next electoral exercise, on what they mean to do in terms of promoting citizens’ welfare if and when they come to power in their countries?r

1 Response to THE POLITICS OF IMRAN KHAN AND KHALEDA ZIA