THEY HAVE SHAMED THEMSELVES

THEY HAVE SHAMED THEMSELVES

Shimul Biswas is perhaps not aware that the prime minister of a country does not stand in a street and write a condolence message in a notebook. He and everyone else who saw nothing wrong with shutting the gates of the BNP office to Prime Minister Sheikh Hasina on Saturday when she went there to offer her sympathies to Begum Khaleda Zia on the death of the younger son of the latter have wounded themselves grievously in the foot. Worse, they have left an indelible impression in the public mind that suavity is not part of the culture of the Bangladesh Nationalist Party, that humiliating those who do not share their ideas — if they are at all ideas — is the basis of their politics. 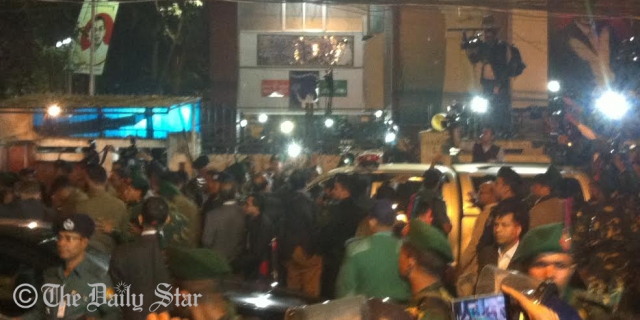 It is perfectly understandable that Begum Khaleda Zia was — and is — in a state of grief. It is only natural that as a mother whose son has passed away — and passed away in foreign land — may not exactly be ready to receive visitors. If Sheikh Hasina had indeed been able to approach her, a distraught BNP chairperson might not have had the inclination to engage in a conversation with her. We in this country are people who are often laid low by tragedy, especially when tragedy happens in our families. But we are also people who are spontaneous in our outpouring of support and sympathy to those who lose their near and dear ones to the inevitability of death.

It is a social convention with us that when a neighbour dies, we share in the sorrow of the grieving family in our humble way through preparing food for them, though being beside them in religious silence. In this society, the family and friends of a deceased person do not tell us that we are not welcome to commiserate with them in their hour of grief, that their gates will be closed to us. In our villages and towns, personal and family enmity is forgotten when someone dies. We pray for the dead and we tell the grieving families that they are not alone in their monumental sadness. It was a consciousness of this culture, this time-tested heritage, which impelled Prime Minister Sheikh Hasina into driving out to the office of former prime minister Khaleda Zia on Saturday.

A few years ago, it was again this very awareness of social norms which Begum Zia demonstrated when she turned up in Dhanmondi to offer her condolences to Sheikh Hasina on the death of the latter’s husband. The difference between then and now is glaring: back then, Sheikh Hasina welcomed Khaleda Zia, appreciated her gesture.

On Saturday, the men and women around Begum Zia, if not Begum Zia herself, shamelessly failed to maintain this tradition of decency. In an act that was plainly uncouth, the activists of the BNP kept the gates of their office shut on the spurious excuse of their chairperson being under sedation-inspired sleep. But where were the relatives of Begum Zia to receive the prime minister? And why were the leading figures of the BNP who call themselves politicians conceal themselves inside the office and not have the decency to come down to the gate and receive the head of government?

These explanations are not good enough. On top of that, Shimul Biswas has had the audacity to ask the Awami League to refrain from indulging in dirty politics over the entire episode? The dirty was in the BNP people swiftly disappearing behind the gates of the premises and locking them from inside when they heard news of the prime minister’s imminent arrival. For anyone to suggest that the BNP people were not aware of the prime minister’s plans is falsehood dished out in sheer bad taste. Every television channel had been carrying scrolls on the movement of the prime minister’s motorcade toward Gulshan. And Shimul Biswas and the senior leaders of the BNP did not know about it?

The argument that Shimul Biswas was running to the gate to receive the head of government, that BNP leaders were doing the same does not hold water.

The prime minister is not an ordinary visitor who will press the bell at the gate and ask to be let in. If the BNP people had not been petty, if they had any idea of civilized and sophisticated behavior, if they had not been dismissive of common courtesy, social norms and protocol, they would have waited respectfully at the gate for the prime minister and led her into the premises. They did not do that. They threw the rules of social behavior to the winds and insisted on making a chaotic concoction of volatile politics and the grief of a mother. In their dark hate, they forgot that it was not so much Sheikh Hasina who was at the gate as it was the prime minister of Bangladesh. And the prime minister, let us not forget, is the symbol of the state, morally and constitutionally.

These men and women whose inordinate ambition for power has caused the death of more than thirty citizens in these past many days have now damaged themselves badly. Worse, they have deeply disappointed the people of this country. Theirs was an outrageous act unprecedented in the history of pluralistic politics.