Exports grew 24 percent to Tk 478.4 crore in 2012-13 from the previous year, according to data from the Export Promotion Bureau. 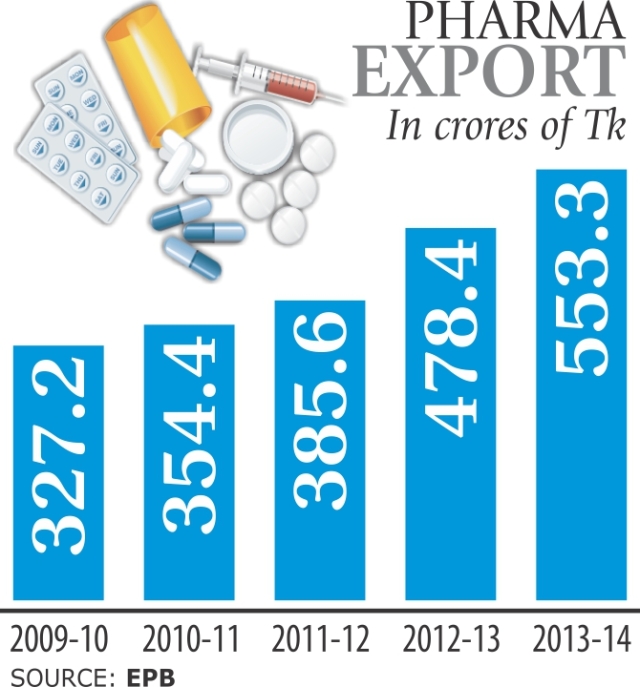 Export figures would have been higher if the country had not gone through a political crisis, Haq said.

The sector incurred losses in the first six months of last fiscal year due to political unrest, which almost broke the supply chain down, he added.

“We import raw materials due to a lack of an Active Pharmaceutical Ingredients Technology Park in Bangladesh,” Haq said.

Manufacturers in an API Park can produce raw materials needed by the medicine makers.

India has its own API Park and as a result, it can offer competitive prices in global markets compared to Bangladesh, he added.

“Bangladesh’s only central API Park was supposed to be completed by 2012, but it is still uncertain, which leaves the entire industry dependent on raw material imports.”

“As Bangladeshi medicine is now being exported to Europe, which is known for stringent regulatory standards, it gives impetus to our pharma industry and creates awareness among global customers, particularly from emerging and developed markets.”

At least five companies successfully entered the European market and received good responses from the buyers, he added.

Political setbacks in the last quarter of 2013 badly affected pharma exports and domestic sales, which caused a loss of hundreds of crores of taka, he said.

“We need adequate support from the government to develop the API Park to make our medicines more competitive in global markets,” he said.

“The API Park has already been delayed by years and we do not know when this will be completed.”

“We also need a central drug testing laboratory to strictly maintain the high standards of medicine and a bioequivalence testing facility to do the clinical testing that is a prerequisite to register our products in the regulated markets,” Haider said.

Manufacturers also need an uninterrupted supply of power and gas to the production units, he said.

The country’s pharma market is currently valued at Tk 12,000 crore. “We need special economic zones for the pharma industry with tax benefits. The API Park in Munshiganj must be completed without any more delay.”

He emphasised collaboration between the industry and universities to promote research activities, particularly in developing specialised drug delivery systems.

A special chemistry course needs to be introduced in universities to strengthen the API capabilities, he said.

“We also need improvements in pharmaceutical regulatory and legal affairs.”