Nepal is scheduled to sign a Bangladesh, Bhutan, India and Nepal (BBIN) motor vehicle agreement on Monday which will permit seamless connectivity of passengers and vehicles through the roadways of these countries.

The deal will be concluded at a meeting of the BBIN transportation ministers slated to be held in Thimpu, Bhutan.

Minister for Physical Infrastructure and Transport Bimalendra Nidhi is scheduled to leave for Thimpu on Sunday to participate in the meeting. BBIN officials had agreed to seal the agreement at the ministerial level at a meeting held in Kolkata last February.

According to Physical Infrastructure and Transport Secretary Tulsi Prasad Sitaula, the agreement was endorsed by a cabinet meeting held last week. The pact will allow movement of passengers and cargo in the four Saarc nations without the need to change vehicles at the border. They will allow each other’s vehicles to enter its territory under certain terms and conditions which will be fixed bilaterally and trilaterally. “Issues like customs and tariffs will be determined by the respective countries and they will be discussed at the bilateral and trilateral forums,” Sitaula said.

“This is an umbrella agreement between the four nations and is completely under the model of the Saarc Motor Vehicle Framework Agreement,” Sitaula said. The motor vehicle agreement was one of the items on the agenda of the 18th Saarc Summit held in Kathmandu in November last year. However, it could not be signed due to Pakistan’s reservations. The motor vehicle agreement has been pitched as one of the most crucial aspects in increasing trade, tourism and connectivity within the Saarc region to create greater socio-economic ties. 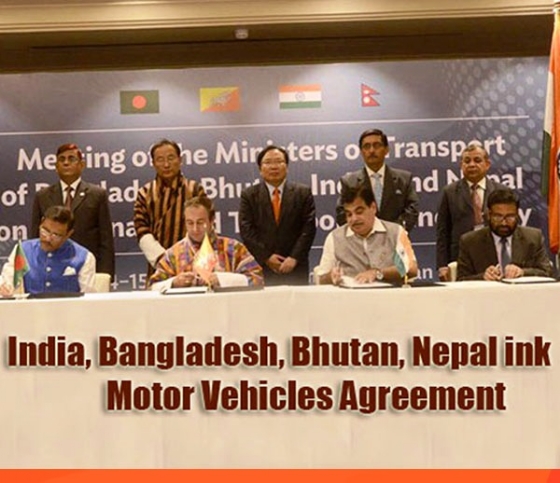 At a meeting held in Colombo, Sri Lanka in 2009, Saarc transport ministers had approved the recommendations of the Intergovernmental Group on Transport (IGGT) to set up an expert group to negotiate and finalize the text of the draft Regional Agreement on Motor Vehicles for SAARC Member States. Last September, the expert group finalized the draft of the agreement which was subsequently endorsed by the fifth meeting of the Saarc IGGT in 2014, which was attended by delegates from all the member states except Maldives.

Devendra Karki, joint secretary at the Physical Infrastructure and Transport Ministry, said that after the umbrella agreement is signed, countries will be able to hold bilateral meetings and define the terms and conditions to enable passage of vehicles and passengers.

“The only difference between the Saarc Motor Vehicle Agreement and the BBIN is the name,” Karki said. According to him, Nepal’s cabinet had endorsed the agreement prior to the 18th Saarc Summit and was ready to sign it. “Since there was some reservation from one of the member states, the deal could not be finalized. Hence, the four countries which were agreeable to the pact have come up with the alternative BBIN,” Karki said.

Meanwhile, senior economist Bishambar Pyakurel said seamless connectivity could help increase inter-regional trade in the Saarc region. “Connectivity is one of the top most priorities to facilitate trade and the economy. However, member states should be able to sit together and discuss the ways of reciprocity,” Pyakurel said.

He added that ease of access to important markets like India and Bangladesh, with which Nepal shares deep economic ties, would do good for the country’s economy if handled properly.