What the world said about Bangabandhu Sheikh Mujibur Rahman:

“I have not seen the Himalayas. But I have seen Sheikh Mujib. In personality and in courage, this man is the Himalayas. I have thus had the experience of witnessing the Himalayas.” — Cuban leader Fidel Castro speaking about Mujib during the Non-Aligned Summit held in Algiers in 1973

“In a sense, Sheikh Mujib is a greater leader than George Washington, Mahatma Gandhi and De Valera.” — Lord Fenner Brockway

“A man of vitality and vehemence, Mujib became the political Gandhi of the Bengalis, symbolising their hopes and voicing their grievances. Not even Pakistan’s founder, Mohammed Ali Jinnah, drew the million-strong throngs that Mujib has attracted in Dacca. Nor, for that matter, has any subcontinent politician since Gandhi’s day spent so much time behind bars for his political beliefs.” — TIME magazine, August 1971

“Nasser does not belong to Egypt only. He is the messenger of freedom for the entire Arab world. His Arab nationalism is the mesage of freedom for the Arab people. In similar fashion, Sheikh Mujibur Rahman does not belong to Bangladesh alone. He is the harbinger of freedom for all Bengalis. Bengali civilisation and culture surfaced afresh from his Bengali nationalism. Mujib is the hero of the Bengalis, in the past and in the times that are.” — Former editor of Al Abram and a close associate of the late President Nasser

“This is surely a supreme national tragedy for you. For me it is a personal tragedy of immense dimensions.” — British Prime Minister Harold Wilson in a letter to a Bengali journalist, after news of Bangabandhu’s assassination

In his own words:

“This may be my last message. From today, Bangladesh is independent. I call upon the people of Bangladesh wherever you are and with whatever you have, to resist the occupation army. Our fight will go on till the last soldier of the Pakistan Occupation Army is expelled from the soil of independent Bangladesh. Final victory is ours. Joy Bangla!” — The Declaration of Independence on the night of March 26, 1971. The declaration was made minutes before his arrest by the Pakistan Army

“If we had remained in Pakistan, it would be a strong country. Again, if India had not been divided in 1947, it would be an even stronger country. But, then, Mr President, in life, do we always get what we desire?” —Speaking about the break up of Pakistan with Nigerian leader Yakubu Gowon

“My greatest strength is the love for my people, my greatest weakness is that I love them too much.” — Interview with Sir David Frost, 1972 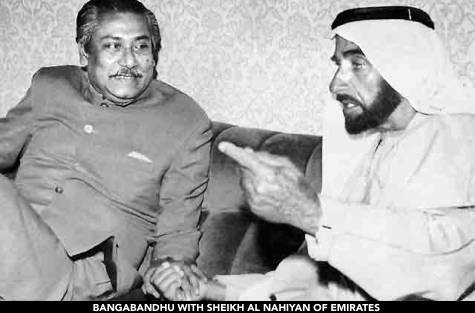 “Yes, but there is a difference. You see, I am a very poor sheikh.” — While being cheered with UAE ruler Sheikh Zayed Al Nahiyan as both men had the name Sheikh 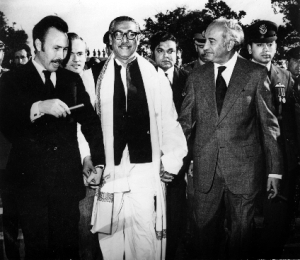 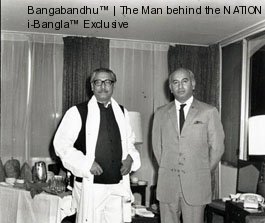 “I am happy with my Bangladesh.” — Replying to a question on whether he contemplated the Indian state of West Bengal joining his country and creating a “Greater Bangladesh.” He was speaking to reporters at a press conference in London in January 1972 after his release from prison in Pakistan