Posted on September 7, 2015 by Ehsan Abdullah 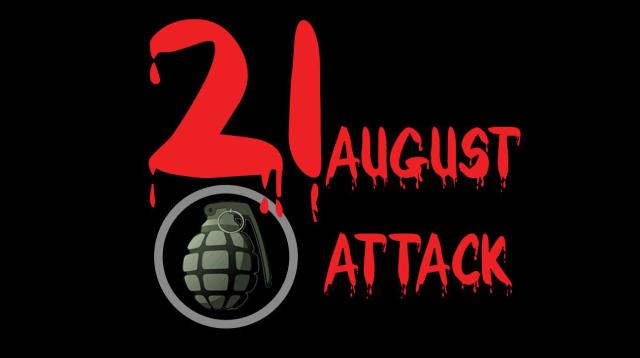 US President George W Bush expresses shock at the grenade attack. US Secretary of State Colin Powell phones Hasina and PM Khaleda Zia to convey the message. He describes the attackers as enemies of the people.

The US, the UK, Pakistan and India offer help to probe the carnage.

Khaleda shelves her plan to visit Hasina amid protests.

The Detective Branch (DB) of police takes charge of investigation but fails to begin its work.

The government announces that it will seek Interpol’s help to investigate the carnage. The CID takes over the investigation. 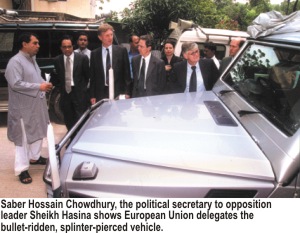 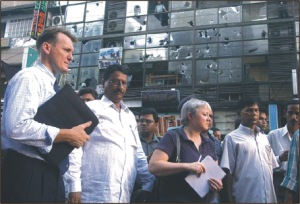 The judicial inquiry commission claims in its report to have identified the perpetrators of the carnage, but its head Justice Joynul Abedin declines to disclose their identities, hinting at the involvement of foreign forces apart from the local ones.

Note: A few months later, senior CID officials make up farcical Joj Mia story and detain him and 20 more petty criminals. Joj Mia and two others are forced to give statements confessing their involvement in carrying out the grenade attack. Their real identities are later revealed by the media. The ludicrous nature of the investigation is exposed by the end of 2004.

Yet the CID does not go for further investigation. Rather, it keeps wasting time by proceeding with the farcical investigation through 2005 and 2006. The CID officials prepare for submitting the charge sheet on the basis of their so-called investigation.

A new CID official is given the charge for fresh investigation into the carnage.

The CID submits charge sheet accusing 22, including Huji leader Mufti Hannan and former deputy minister of the BNP-led government Abdus Salam Pintu. The charge sheet hints at the involvement of some government and security high-ups in the plot.

Court frames charges against the 22 accused (and begins trial the following month).

Prosecution files a petition with the court for further investigation to identify the suppliers of Arges grenades used in the attack and sources of financing.

A new CID official is assigned for conducting further investigation (and he continues the task for about 23 months). 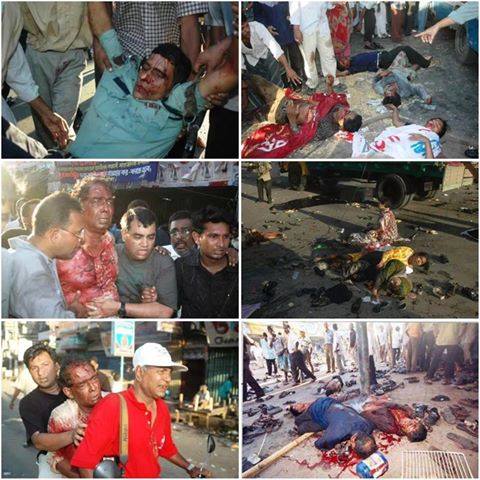 Court frames fresh charges against 30 individuals accused in the supplementary charge sheet, taking the number of accused to 52.

Then IGP Shahudul Haque and then DMP commissioner Ashraful Huda are charged with providing financial and administrative support to the attackers.

Then deputy commissioner (East) of the DMP Obaidur Rahman and then DC (South) of the DMP Khan Sayeed Hassan are charged with having the evidence of the attack vanish and providing the killers with administrative assistance.

Then senior officials of the CID — SP Ruhul Amin, ASP Munshi Atiqur Rahman and ASP Abdur Rashid — and former IGP Khoda Baksh Chowdhury are charged with misleading the case and creating the ridiculous Joj Mia drama to save the killers.

Ruhul Amin, Atiqur Rahman and Abdur Rashid were the officials who led the first investigation when Khoda Baksh was the IGP. 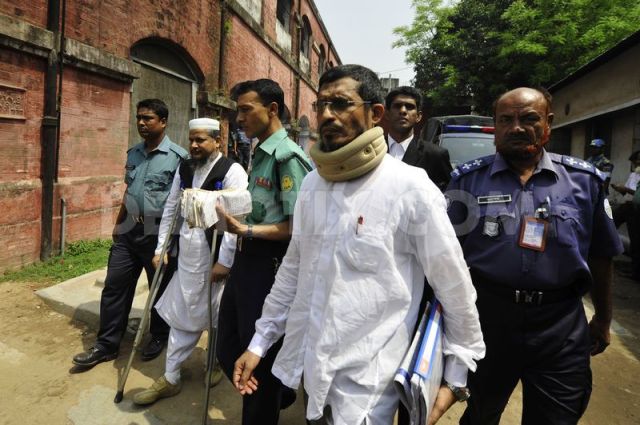 The court so far has recorded statements of 176 witnesses out of 491 in the case.