People of Bangladesh have learnt how to tackle climate change, disasters and survive, Prime Minister Sheikh Hasina has said after receiving the UN’s highest environmental honour – ‘Champions of the Earth’.

The Under-Secretary-General of the United Nations and UN Environment Programme Executive Director Achim Steiner handed over the award to her at a programme in New York on Sunday, local time.

“This award is a recognition of spirit and resilience of our people in fighting climate changes,” Hasina said, dedicating the award to the people of Bangladesh.

The UN had said the award, in the Policy Leadership Category, recognised ‘Bangladesh’s first-off-the-block initiatives under Prime Minister Hasina’s government to prepare the ecologically fragile country for the challenges it faces from climate change’. 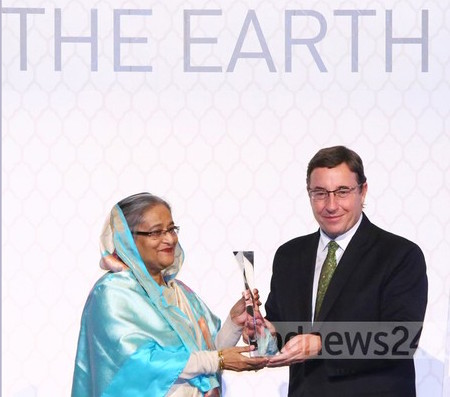 Since its introduction in 2004, the Champions of the Earth award has recognised 67 laureates in the categories of policy, science, business, and civil society.

In her acceptance speech, Sheikh Hasina said, “Bangladesh, as you know, because of the geographical position, our people face adverse climate situations all the time.”

But, she added, efforts were on to ensure that “people lived in a better condition”.

“Because of natural calamities, our people have learnt how to combat this situation and we are doing it with our own resources.

“We receive many promises from different countries, but, practically, we haven’t received any substantial amount of money or any other things. But we didn’t sit idle,” the prime minister said.

She continued, “We started with our own resources and ideas how to save our country and our people from these climate changes. We have taken our own steps and now we’re getting the results.”

She said it would have been very difficult for her government to face these challenges without people’s cooperation.

She concluded her speech by dedicating the award to the people of Bangladesh, saying, “I love my people. I dedicated my life for the people.

“I want to establish Bangladesh as a poverty-free, hunger-free, developed country, and Bengali people as a developed nation.”
Earlier, UNEP Executive Director Achim Steiner said Bangladesh prime minister’s ‘visionary leadership’ had led her country to be the first to introduce a ‘Climate Change Strategy and Action Plan’ to effectively protect the environment.

He added that following her initiative, Bangladesh was also the first state in the world to set up a ‘Climate Change Trust Fund’.

Sheikh Hasina’s ‘prudent’ leadership would ‘inspire’ many other countries to play their part in making the world safe for the future generation – a UN goal, Steiner added.