ON THIS DAY: 7 MARCH, 1971 BANGABANDHU SOUNDS CALL TO LIBERTY

It was a day of decision. On 7 March in 1971, Bangabandhu Sheikh Mujibur Rahman led the Bengali nation across the political Rubicon. At a time when the nation and observers abroad expected him to make a unilateral declaration of Bangladesh’s independence, he trod a fine line and made it clear to the world that while he was not about to announce a UDI, he was leaving no one in any doubt that the Bengali nation was headed for political freedom. In a speech which encompassed the history of Pakistan over the preceding twenty three years, Bangabandhu spelt out in brief and yet great detail the many ways in which the people of East Bengal had systematically been denied their political and economic rights by successive governments of Pakistan. 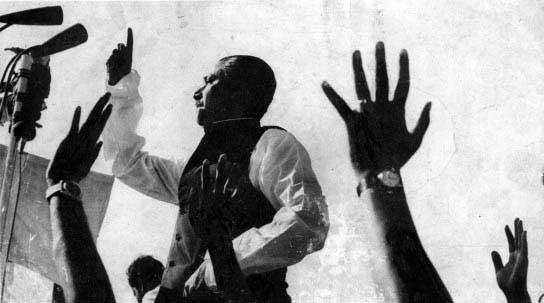 And then Bangabandhu came to the immediacy of the moment. Referring to the political crisis caused by the theatrics resorted to by Zulfikar Ali Bhutto, followed by the postponement of the national assembly session, which again was followed by General Yahya Khan’s invitation to political leaders to a round table conference in Rawalpindi, which subsequently was rejected by Mujib and then a rescheduling of the national assembly session for March 25, Bangabandhu spelt out his preconditions before his party could consider joining the session. These conditions were four in number: one, martial law would have to be withdrawn by the regime; two, an inquiry had to be initiated into the killings of Bengalis by the Pakistan army since the beginning of the month; three, the army would have to be taken back to the barracks; four, power would have to be transferred to the elected representatives of the people. The last demand said it all.

But a probable fulfilment of the demands, as the Bengali leader pointed out in the course of his oration, was no guarantee that the Awami League would join the session. Bangabandhu merely told the million-strong rally at the Dhaka Race Course that he would see if he could or could not join the national assembly session. He left the door open for negotiations with the regime and yet gave out the very strong message to his people that independence was the eventual goal before them. It was oratory at its sublime as Bangabandhu concluded his address. “This time the struggle is for emancipation”, he declared. “This time the struggle is for independence.”

7 March 1971 was a sketching of the contours of freedom. It would forever change the course of history for the people of what would soon be a free, sovereign Bangladesh.