The assassination of Bangabandhu Sheikh Mujibur Rahman and most members of his family on Aug 15, 1975 failed to make the headline in the Daily Ittefaq on the following day.

It was the same for the other media.

Ittefaq, the best-selling Bangla newspaper of the day, prioritised the army takeover over the killings in its Aug 16 edition.

“During the takeover, former President Sheikh Mujibur Rahman was killed in his home,” it went on.

Next to the lead, there was a two-column editorial headlined “Historic New Journey”.

Nurul Islam Patwary was editor of the newspaper at the time. Asafuddowla Reza was the news editor.

Daily Ittefaq, edited by Tofazzal Hossain Manik Mia, was known to be a mouthpiece of the Awami League before independence.

The other headlines on the first page of that day’s edition of the newspaper included “Vice president, 10 ministers and 6 state ministers take oath”, “Return of up to Tk 8,000 of invalid currency”, “Takeover in the greater interest of nation”, “US to continue normal diplomatic operations”, “People heave a sigh of relief”, “Felicitations by several quarters”, “Status of foreign embassies to remain unaffected”, “BA Siddique becomes Red Cross Chairman” etc.

After Bangladesh Krishak Sramik Awami League or BKSAL was founded through the Fourth Amendment to the Constitution in January, 1975, Ittefaq and three other newspapers were being published nationally at the time.

The headline of its editorial on the front page was “A Historic Step”.

The top daily also reported on the front page: “No compromise with corruption”, “Alliance-free policy will be followed: President”, “10 ministers and 6 state ministers take oath”, “US to continue diplomatic operations with new govt”, “Up to Tk 8,000 of invalid Tk 100 currencies will be refunded”, “Pakistan decides to give recognition”.

In its op-ed section – ‘Our Comments’ – a write-up was headlined: “On the Threshold of the New Era”.

Photo of Mushtaque taking oath was published with the lead story. 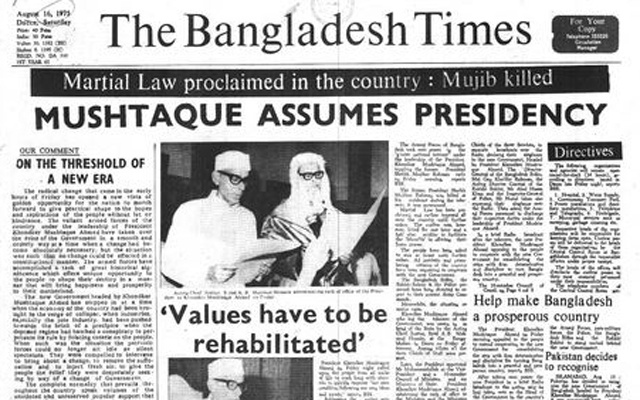 The eight-column story also contained a photo of Mushtaque being sworn in.

The editorial was headlined “Historical Necessity”, flanked by the reports with headlines: “Special prayers” and “Mushtaque calls for co-operation”.