A SAGA OF DISGRACE

A SAGA OF DISGRACE 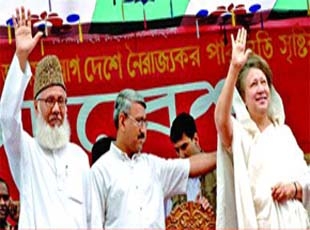 The International Crimes Tribunal-1 deserves kudos for strongly denouncing the appointment of anti-liberation leader Motiur Rahman Nizami as a minister by the then BNP-led government in 2001.

The appointment was a great blunder; said the court, a clear slap in the face for the Liberation War as well as three million martyrs and two lakh women who sacrificed their chastities for the liberation of Bangladesh.

BNP chief Khaleda Zia, the then premier, had inducted Nizami into her cabinet and gave him important portfolios — first the agriculture and later the industries.

Khaleda made a grievous political mistake by picking Nizami as a minister. But that was not all. She made another Jamaat-e-Islami leader Ali Ahsan Mohammad Mojaheed a technocrat minister. A tribunal last year handed Mojaheed death penalty for committing crimes against humanity.

For Khaleda, induction of the two anti-liberation leaders into her cabinet was only following in the footsteps of her predecessors.

Her husband Gen Ziaur Rahman, founder of BNP, started the practice. He made anti-liberation leader Shah Azizur Rahman a minister in 1978 and the prime minister the following year.

Shah Aziz was again made the prime minister by Justice Abdus Sattar-led BNP government in 1981.

Gen Zia who became the chief martial law administrator and later took the office of the president had desperately relied on the anti-liberation forces to consolidate his political power base.

In the process, he made Abdul Alim a minister in 1978. A tribunal last year convicted Alim of crimes against humanity.

Anti-liberation leader Abdur Rahman Biswas might be considered as more fortunate than many others. He was made a minister by Gen Zia in 1979. The Khaleda-led BNP in 1991 elected Biswas the parliament’s Speaker and later the country’s president.

A veteran freedom fighter, Gen Zia opened the door for anti-liberation forces, including Jamaat and other fundamentalist political parties to consolidate in Bangladesh’s politics by withdrawing the constitutional ban on their politics.

Gen HM Ershad then came up on the scene. Based in Pakistan in 1971, his role as an army officer was reportedly against the Liberation War.

Despite being a repatriated officer, he managed some quick promotions in Bangladesh Army. Finally, he grabbed state power in March 1982 by overthrowing the then elected president.

Like Gen Zia, he also counted on the support of the anti-liberation forces. In 1986, he made Salauddin Quader Chowdhury a minister. A tribunal last year found him guilty of committing crimes against humanity.

Ershad picked Abdul Mannan, another anti-liberation leader, as a minister in 1987. Mannan was earlier made a state minister by the then BNP government in 1981.

All these instances are examples of how the anti-liberation leaders were made ministers either as members of the BNP or Jatiya Party.

But the appointment of Nizami and Mojaheed as ministers by Khaleda Zia in 2001 was more significant as it gave Jamaat, as a political party, the taste of state power in independent Bangladesh.

This also gave Jamaat the scope to strengthen its organisation countrywide. The party did not waste the opportunity. It has now emerged as a strong organisation.

The Jamaat demonstrated its strength by enforcing a few dozen hartals and staging violent protests following the verdicts in war crimes cases against its top leaders. This may surprise many as to how a defeated force can now challenge the judiciary by enforcing such hartals.

The anti-liberation force had its first opportunity to take to the streets against the Ershad regime. Along with the Awami League, it joined the 1986 parliamentary election held amid a boycott by the BNP-led alliance. 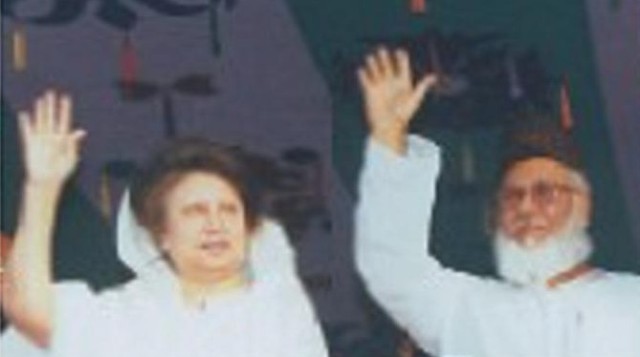 Later, Jamaat maintained good relations with the AL to wage a movement against the then BNP government in 1994-96 for the introduction of a non-party polls-time government. Though Jamaat had no electoral alliance with the AL, it gave the party a great opportunity to consolidate its position.

But Khaleda-led BNP took a step forward and forged an electoral alliance with the Jamaat before the 2001 national polls. The alliance remains intact since then.

The above examples expose how the perverted politics and major parties’ greed for grabbing power had given the anti-liberation forces opportunities to consolidate their political power in independent Bangladesh.

Our perverted politics keep disgracing the nation in many ways.